Finally, after forever, I had the focus to write about our charcoal press in action!

After the very intense charcoal press fabrication which I wrote about two blogposts ago, and an exciting weekend in Mikinduri, Monday was Charcoal Press testing day. 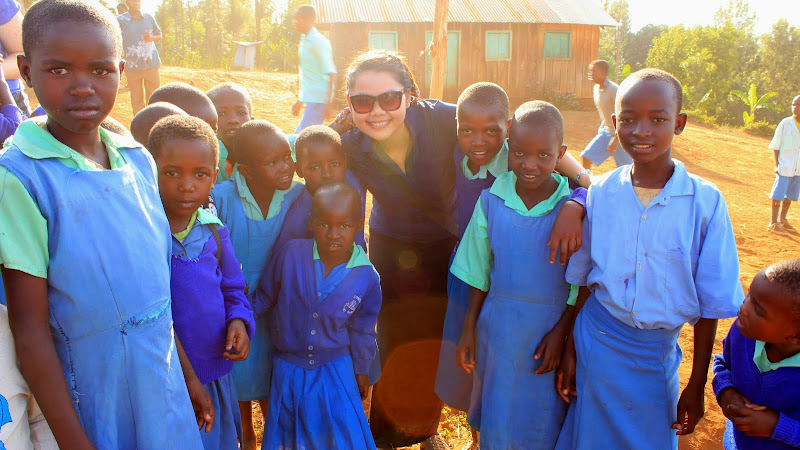 Some kids in Kinwe primary

We did the testing in Kinwe, where one of the MCOH feeding programs are being held, Kids in Kinwe Primary Schooland they Moringa (a very nutritious vegetable they dry and sell, or add to food in feeding centres) plant is located. The kids were as usual energetic, and were very excited to see us. I was in this area for three days, and I got to experience giving away food to the kids for two days. I even tried their food (due to some hard peer pressure from the kids, lol). It was good, but all of that will be another blogpost.

Now to the charcoal press demonstration. 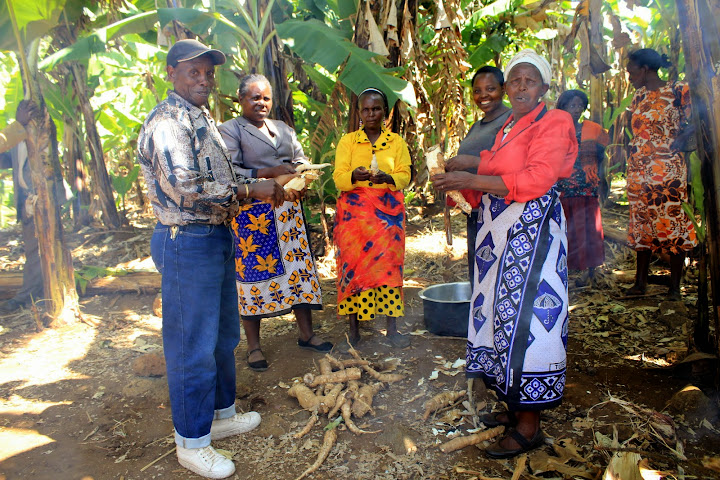 There were about 40 people present on Monday to witness the demonstration. There were farmers, some local leaders, members of the forest conservation group, some MCOH members, and other concerned citizens. The district minister of health was even there too, and it was even cool that he is an engineer too.

We started by preparing the materials, and it was pretty amazing how they just get the 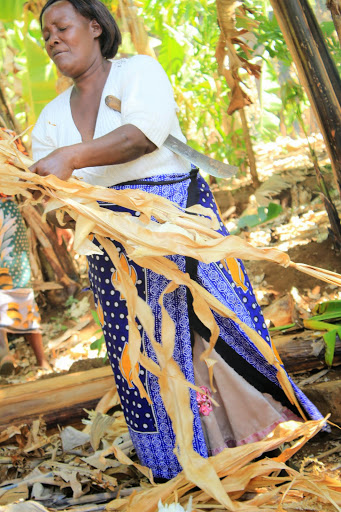 stuff around. They dug holes to cook cassava, started the fires and the barrel. Some women were cutting cassava using machetes (it was pretty amazing, they used it for everything). I learned that day that people there don’t like eating cassava, because it has a “poor-food” reputation. Apparently, it will make you “look” pathetic if you ate cassava. So, they are basically waste to them, and they cost next to nothing. This removed my worry that we were using up their food for charcoal. They were actually happy to find use for them, especially that they are ridiculously easy to grow. 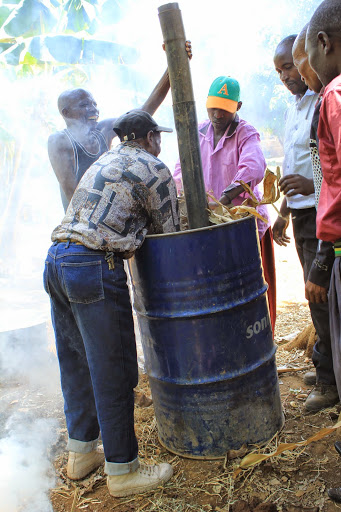 After the cassava started cooking, we started packing the barrel with agricultural waste. I say we because I was doing it too. I tried doing it the Kenyan way, so I grabbed a pile of cornstalks and broke them with my elbow or knees. It was way more fun than I thought it would be. And I must say the women there are experts with using machetes, that when it’s easy enough to cut, they just shrug the machete under their arm and break it with their hand. I didn’t try that, because I have a love-hate relationship with knives. 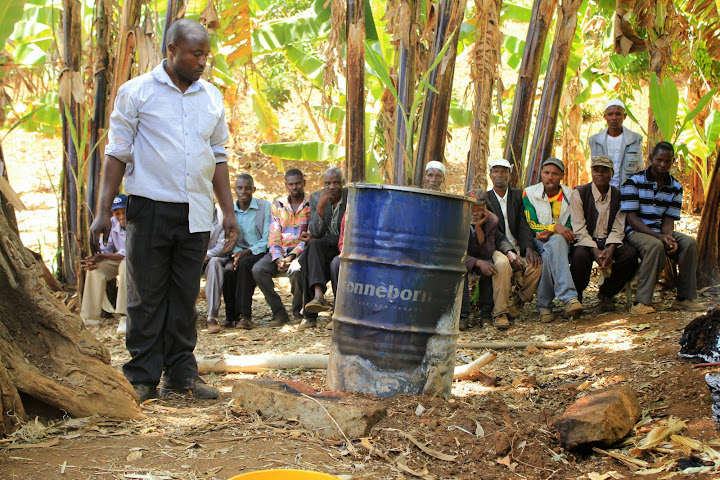 When the barrel was packed, we lit the fire and it started to burn. It was my first time to do the barrel part myself, so I was also learning to do it. Apparently, we had the fire running that it usually should. So there were many questions on why it is using too much energy, which I really appreciate because it goes to show they are actually interested. 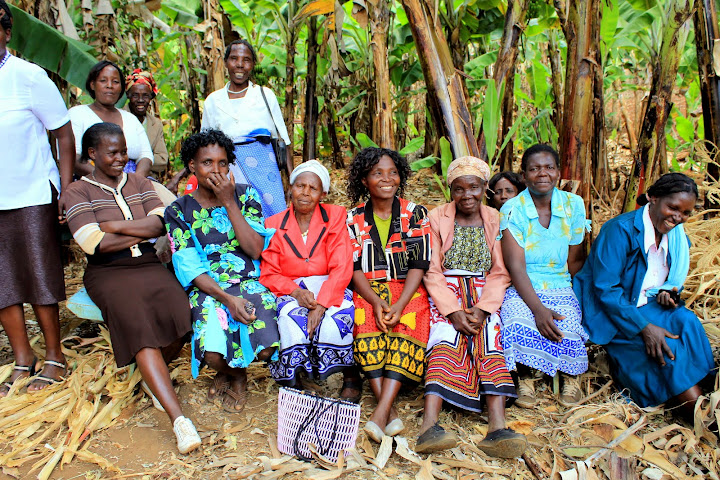 I admired these people’s patience. They watched there for at least three hours of carbonization, not including all the preliminary preparations yet. So, I went around and took their pictures, and they were really thrilled! This is especially that most of them haven’t had their pictures taken before. Everyone started calling me to their area and asked me to take their pictures too, of course in sign language because they could not speak English. 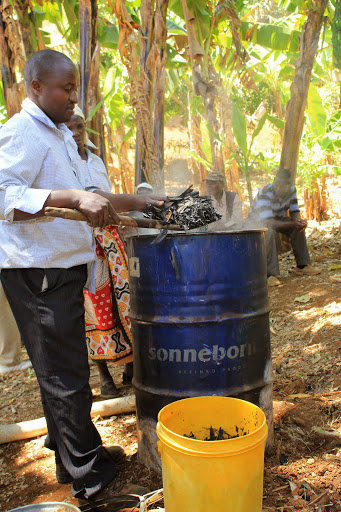 When the carbonized materials were ready, Francis, MCOH’s community development head, opened the barrel and dug the materials, holding it up with his hand so it doesn’t fall. I almost had a heart attack seeing him do that, because I thought he’d burn his hand. But he told me that was the African way. I really should have known that by that time!

All eyes were on the press when I was demonstrating to them how to use it. It went way more complicated than I had planned… surprise, surprise! (Not really).

While doing the proportion that we determined to do in Canada, I found that a lot of the consistency that we anticipated were different. Everyone was also excited so they just kept on adding water and threw the proportion way off during the process, and it was really hard to undo. So, for the sake of the demonstration, I just used whatever we had for pressing.

While pressing, we noticed a lot of things we need to change with the press. There were things we removed (or changed) that should be adjusted. There were also many suggestions during the process, which were all meaningful and useful modifications. Those were one of the main reasons I came there anyways. 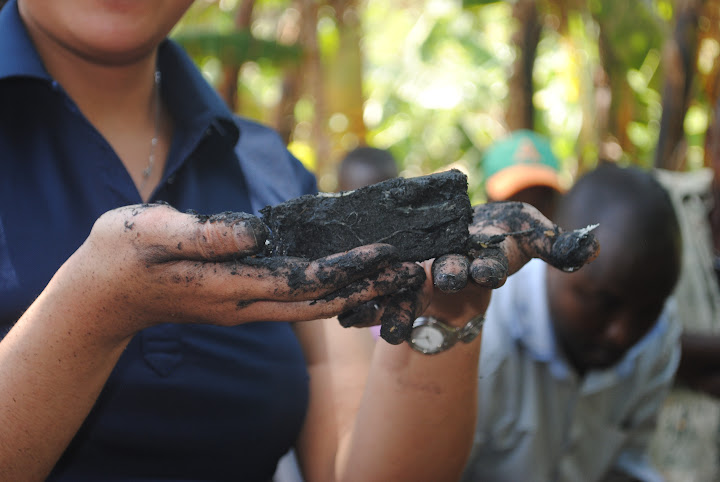 After the demonstration, everyone seemed to be really impressed and quite shocked that charcoal was actually produced. We passed it around and everyone was pressing it with their fingers, as if making sure it’s real.  Then, there were numerous speeches done by various people, and different levels of leaderships from different groups. I have learned by that time already, from being in several places, that Kenyans like doing short speeches (by short, I mean each person do one about the length of an eloquent graduation speech). Some of them spoke in Swahili (their national language), and some spoke in English and then translating it afterwards (yep, it doubled the speech time). 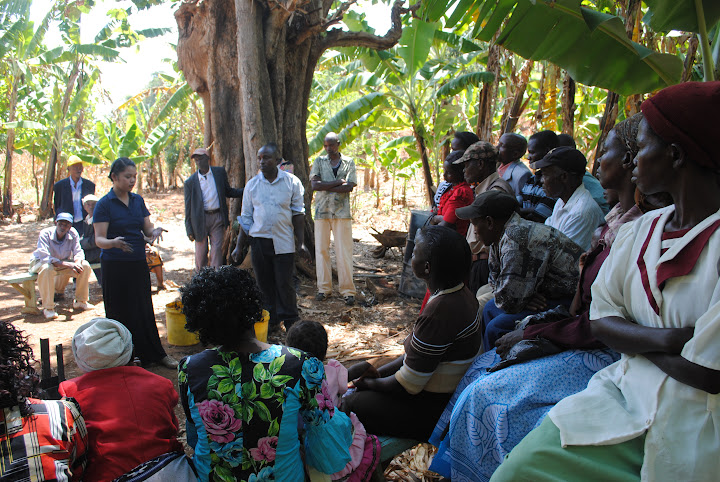 But basically, they were all saying how they are very impressed by the process, how they are very thankful for the “technology” from Canada that we are sharing them, and how they think this will impact their community. Libby and I also spoke shortly (now this is short in the same way you and I understand it) to everyone, and I also thanked them for their patience and participation.

I was really glad for their response. We asked them to select five people to train on the process, and they excitedly pointed out to key people, and I also asked some really interested participants.

farmers using the press themselves!

Farmer showing off the charcoal he pressed!

They came back the next day, and I trained them on how to do it themselves, without my help. I answered questions, and suggested modifications that they can also make. They were keen on following the process correctly. This day, the press’s handle bent, I was a bit scared that they’d be disappointed, but I quickly explained how we had different materials in Canada. The alternative that we picked did not take the force very well. But they still wanted to finish the rest of the charcoal so we pressed even if it was already bent. At the end of the day, I brought the press home with

me to drop it off to the local polytechnic to be repaired. They suggested some changes, and we ended up replacing the handle with a huge pipe, because it was the only piece that we can find with the thickness we need. Phew! The joy of engineering design!!

Wednesday was a day for something different. I spent the afternoon testing the charcoal briquettes we made though, for the final demonstration on Thursday.

Thursday, a few other farmers came back for me to demonstrate to them that the charcoal actually burns. I was there early, so I went to give food at the feeding centre again. I saw monkeys and some rare birds while waiting too. 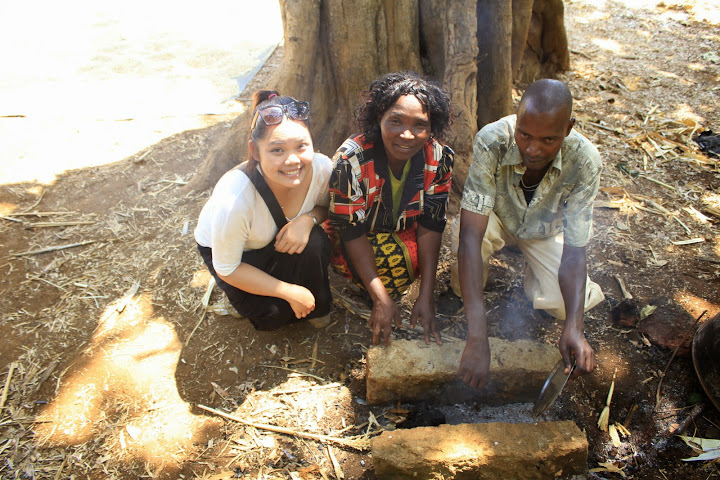 Before we went home, Francis told me that they are going to regularly make these charcoal through the forest conservation group first. Then, they will start selling the charcoal at a lower price, and when people start buying them, they will increase the price for profit. That way, people will also be curious about the process and will want to adopt it.

It was pretty exciting how every time I tell people what the purpose of my trip to Kenya was, they all wanted me to teach them the process. I wish I had more time though! 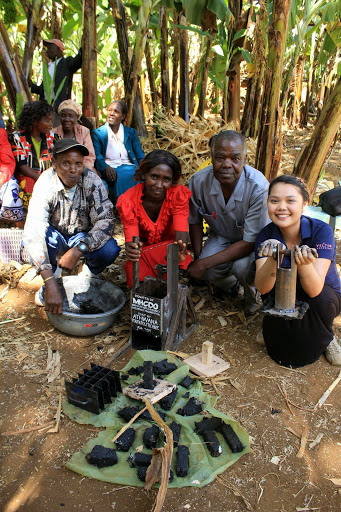 On Friday, we had a final team meeting with all the Kenyan members. It was pretty humbling how they were all appreciative of all the work we’ve done within the two weeks that we were in Mikinduri. It was even more inspiring to hear how they appreciate the charcoal press. What started as a simple engineering project that we only did because we were required to, has come this long way, and we’re doing it because of its potential to help others. One of the board members even said, “This might be a small and simple thing to you, but you don’t know the impact it can make to our communities.”

As I look back today, I never thought this press would go this far, let alone that I will get to Kenya to implement the design and get feedback from our actual clients. But I must say it was an exceptional experience, both as a student, as an engineer and as an individual. It has been a roller coaster ride to get to it, but I’d take that again if I had to.

I am just really thankful for all the support we’ve had so far for the project. I hope that this can also serve as an inspiration to engineering students and practitioners, that our profession is not a limitation to what we can do to make the world a better place for everyone to live in, and to the difference we can possibly make in the lives of others.

Here’s more pictures from the trip!