This week is my only weekend at Mikinduri! It was well spent, I must say.

Saturday, we went to an orphanage about 2.5 hours from Mikinduri. The drive was long and I was sleeping more than half the drive. When we finally arrived, the kids welcomed our combi with a beautiful singing. Their faces were all plastered with big smiles and they were all singing their heart out.

They toured us around the orphanage, still with singing and dancing as they were walking around. Then they performed a song and a dance. The kids were clever enough to make their own drum set out of paint cans and water jugs. It was really fascinating how well they can play and perform despite all they had. 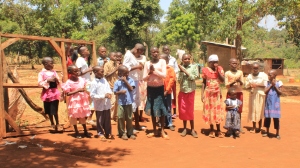 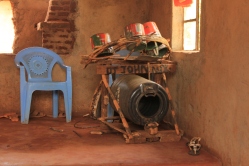 Playing with the kids was really fun. They were all excited even with the hair elastics we were giving them. Jeanelle, one of the nurses on our team brought balloons, and Libby brought a Polaroid camera. They were all enthused by seeing their pictures. Before we even knew it, the kids were all playing with our cameras too, and they all learned how to use even mine pretty quickly!

There was a very cute three year old girl that I noticed since we came, she was not singing, and she was getting left behind a lot. Libby took her but she kept a straight face the whole time. She fell asleep when Mary took her, which was very sweet. When the kids were playing, she came back, still looking sad. I took her, and they told me she is new and she was just orphaned last year. I kept her with me the w 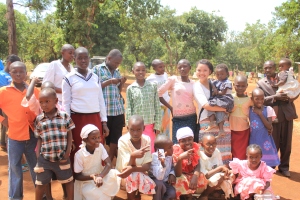 hole time, and I can really see the sadness in her eyes. She half-smiled for a little while, and she just kept her straight face the whole time. I really hope she could have stayed with me a little bit longer.

We left the orphanage pretty early. But it took a while before I had my heart back. The kids are just so close to my heart, especially being a Sunday School teacher since I was thirteen. I have always wanted to start an orphanage, and maybe adopt a kid or something at some point in the future. I just always wish every kid grew up knowing that God loves them and that they are loved and are valuable. Being in an orphanage just makes my heart cry, both from joy, in being thankful that these kids were at least in a place where they have their basic needs met and they can get education, and also from grief, that I know there are millions of other kids that are either orphans or abandoned that are vulnerable and lost.

It is always a bitter sweet feeling leaving kids after theses visits. You’re happy because you made them smile and made them feel loved even for a short moment, yet you are also sad because you have to leave them and wish you could just stay and help them forever. But one thing is for sure though, visiting just reinforced my dream of doing something about it soon (when God leads me J )

After another long drive and some stop overs, we spent the night at a Kenyan bar to have a meet and greet with MCOH, Farmers for Farmers and Chalice volunteers. Everyone is nice and friendly. I got mango juice and sat playing Jenga with a great bunch of people. It was my first time and it was very fun! We ended the night beating our own record with 31 stories high (13 new rows)! That is pretty good from a novice’s standpoint… I don’t really know any other standards.

The next day, I woke up with a sleepy head after taking Benadryl the night before and in the morning. I had some rashes, which I usually get when I move to a place with a different climate, which was just made worse by some heat rashes. I went back for a few more minutes of sleep after breakfast, and finally got ready for church.

I joined Nelly, a Kenyan occupational therapist that also works/volunteers for MCOH, and Patrick, a Chalice volunteer for church. They go to a Methodist church, about 15 minutes’ walk from the hotel where we stay. I learned from Nelly that Kenyans usually stick to the denominations they grew up to join, that’s why she goes to that church even if she lives next to another.

The church was big, lots of people were there, and mostly were a bit skeptical about greeting me at first (of course, I look different). The service started with hymns and a bunch of readings, which made me figure this church was probably a more conservative/ traditional one, especially that when there were mo 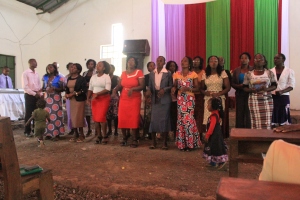 re singing, they were all with very modest dances (I know, you would be expecting more enthusiastic moves from Africans!). But their singing were all beautiful and heartfelt. During the announcement, the church secretary talked while looking at me, and Nelly and Patrick said she was asking if I could come up to say hi to everyone, so I did! (I know, I lost my shy skin some time ago)… I walked up, and said “Muga” in the microphone, meaning “Hi” in Swahili, the local Mikinduri dialect. They were all amused, with a really cute reaction and giggles. Patrick translated while I talked, and they were all with big smiles at me. I was really glad for their warm welcome.

The preacher was so cute, when she finished praying before her sermon, she mentioned “Mzungu” and was giggling. She came down to me and kissed me on the cheeks, shook my hand a lot, and introduced herself to me, ending by saying “Jesus Chris is my Lord and Savior”. When she went back to the pulpit, she talked and everyone laughed. Patrick said that she said “I never said hi to a Mzungu before so I had to do it, it’s my first time”. “Mzungu” is the term they use to call white people (plural is Wazungu), and I was told they don’t differentiate between Asians or Caucasians, as long as someone is “white”, which I find is very funny. Anyhow, I did not understand a word from the preaching. Nelly said she was talking about the power of prayer defeating the devil, and that God blesses us when we give ourselves to him. People seemed to be listening attentively (at least for the most part) and the preacher was very passionate while talking. She ended the preaching with a prayer. (They probably had like 5 or 6 prayers throughout the service). They ended the service with a prayer and a song.

After church, they had an auction of the items that were given to the church as either a donation, or tithe. There were bananas, sugar, and other things I do not recognize. During the auction, everyone kept on shouting “Mzungu” and they kept on giving us bananas. Patrick said everyone wanted to give me bananas as a welcome for me (So nice, I know right!). The preacher went to me and whispered that we should stay for lunch. Another lady invited us for tea as well. So we stayed and went at the back of the church, where a heaping plate of food I do not recognize is waiting for me. I asked what they were, and they were all basically starch and carbs: Mashed potatoes with red beans, potato salad-ish with corn and bananas, and fried rice with some orange-y vegetables. Nelly said they were all traditional African dishes. I left stuffed as crazy, because I had the most carbs in a meal I ever had. They were all watching me as I eat, pretty awkward but funny. I took their pictures and they were all so happy, as they all never had their pictures before. I played the piano for them before I left, and everyone made sure they shook my hand. They were all very happy an 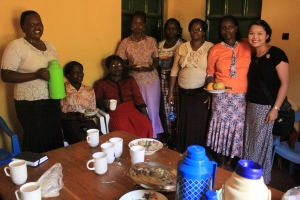 d warm people, I can tell they did not have much, but they were full of joy and very accommodating to me. I gave Nelly and Patrick the bible I was using as a thank you, and because they did not have a bible with them to church either. It was given by a friend from PEI so I can give it to someone else down here. I was really glad even for the short time they spent with me so I can go with them to church.

The rest of the Sunday was pretty much a time to chill and relax. I had a very nice afternoon nap, a nice snack and supper, of course by the awesome chef Ken (who can by the way, make anything).

We ended the night playing Ajaua. It was a traditional game played by elder men here, mostly all day everyday out in the streets. I was quite excited because it was very similar to “Sungka”, a game I used to always play with my grandmother, only with different rules. I managed to win 4 times (they say it was equivalent to 5 or 6 wins because of some fancy rules), two of those I played with no guidance (lol). I went to bed with a little bit of an upset stomach from lunch, but I definitely had a great day.

I wish I had more Sundays in Kenya (and in Mikinduri). 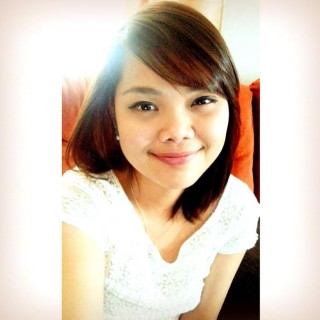